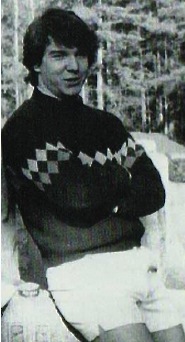 At Dartmouth, he played junior varsity hockey and majored in Government. Peter was named a Hansard Scholar and had the distinction of interning with a British Member of Parliament known, both to his constituents and detractors alike, as the “Lout from Lambeth.”

Peter was a laconic Mainer with an easy smile, a good-natured amiability, and a booming laugh.  He could often be seen around campus engaging in one of his favorite pastimes, early morning free-range bocce, often culminating on the president’s lawn.  As a member of Bones Gate, “Brose” served as social chair and pledge trainer, and did much to uphold the Bones Gate motto:  “This Gate hangs high, and hinders none, refresh, enjoy, and travel on.”

An avid outdoorsman, Peter became a whitewater rafting guide and bungee jumping instructor after graduating from Dartmouth. In his later years, he worked as a business manager for many Brunswick enterprises. Peter was devoted to his family, for whom his love was in many ways a  reflection of Peter himself – strong and true.  He will be sorely missed by his family, his many friends, and his fraternity brothers.  All those who knew Peter are requested to make a final toast to his memory.

Memorial contributions may be made in Peter’s name to the Midcoast Youth Hockey Association, P.O. Box 1019, Brunswick, ME 04011.