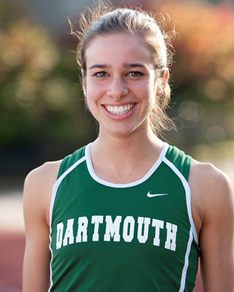 Recently featured on the cover of Dartmouth Alumni Magazine, track star Abbey D’Agostino ’14 will run in her last Dartmouth race and (pending qualification) compete for her eighth national championship in the 5,000 meters at the upcoming NCAA Division I Track and Field Championships at the University of Oregon on Saturday, June 14, at 6:24 EST.
In the weeks leading up to the race, Dartmouth is encouraging alumni and other fans to celebrate Abbey’s career by sending supportive messages and photos via Facebook, Twitter, or Instagram, using the hashtag #RunwithAbbey. The College will collect the posts and share them with the Dartmouth alumni community after the championships.
A 10-time All American, Abbey is one of the most decorated athletes in Ivy League history. In 2013, she became the first Ivy League athlete—male or female—to win the NCAA Cross Country Championship.
Join the fun—and #RunwithAbbey on June 14. You can watch Abbey’s race live on ESPNU (television) or ESPN3 (online).
Let’s go, Dartmouth! Let’s go, Abbey!